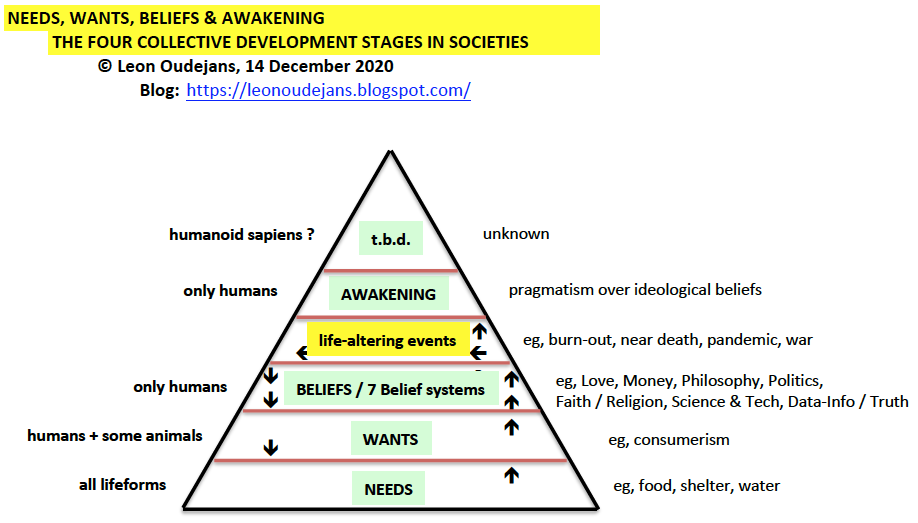 Ever since, I have been wondering about my concept: do 3 collective development stages and 1 individual stage even make sense?

Moreover, what is an Awakening?

Sure, you’re losing your beliefs. However, what comes instead of those beliefs?

My breakthrough only arrived recently, when I made a casual remark to a friend: “I have little ideology and lots of pragmatism” (my recent blog).

Ideology equals ideological beliefs. Hence, pragmatism must then succeed the Beliefs stage in societies. The more I thought about this, the more I became convinced of this view. Soon, I realised that China and USA are the corresponding examples: America went from pragmatism to ideology, while China went the exact opposite way (ie, from ideology to pragmatism).

Many beliefs are dualistic in nature: either you believe in them – or you oppose them. Ideological beliefs have a tendency to become rigid over time. GPF-2016: “[] people tend to only read and follow things with which they already agree. The number of people who consume information with which they disagree is fairly small.” Also see my 2019 blog.

In general, pragmatism follows the principles of utilitarianism or the Greater Good theory (see my blogs). Hence, the macro perspective is often more important than the micro perspective. Morality depends on the situation and/or the end result. Pragmatism is thus closely related to consequentialism, including Niccolò Machiavelli‘s statement: “The ends justify the means“.