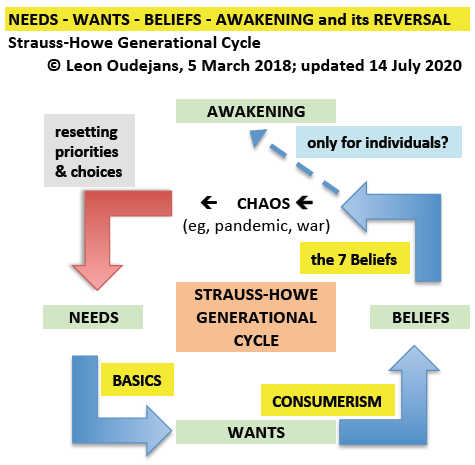 On 6 March 2018, I published a diagram showing Needs, Wants & Beliefs in reverse following the Strauss-Howe generational cycle (eg, systemic war). A few days ago, a friend raised the question whether the coronavirus pandemic may be able to reverse Abraham Maslow‘s hierarchy of needs. Such reversals happen for similar reasons: chaos, destruction and/or disruption.

Moreover, there is a significant overlap between Maslow’s hierarchy of needs and my concept of Needs, Wants, Beliefs & Awakening (see my 2017 blog and my 2019 blog).

Human history shows more of such examples, like the Cahokia Mounds State Historic Site near the Mississippi river. Wiki: “Diseases transmitted among the large, dense urban population are another possible cause of decline.”

The prospect of urbanisation failing over a pandemic is not appealing. In the Netherlands, the densely populated Randstad megalopolis accounts for about 10% of space and almost 48% of the 17.4 million Dutch inhabitants.

Migration of people was already on the rise before the coronavirus pandemic. Their reasons differ: economic refugees (eg, Germany 2015), climate refugees (eg, UNHCR), and civil war refugees (eg, Rohingya, Syria). However, mass migration is often seen as a cause for – rather than an effect of – pandemics (eg, BBC-2020, NCBI, WHO).

In times of adversity, we (must) reassess our priorities and choices. Holding on to our beliefs and our wants (ie, consumerism) is a luxury we often can no longer afford. Hence, my concept of Needs, Wants & Beliefs in reverse.

A quote from “Post-Traumatic Growth: Finding Meaning and Creativity in Adversity” by Scott Barry Kaufman (b.1979), an American humanistic psychologist and popular science writer:

“We tend to rely on a particular set of beliefs and assumptions about the benevolence and controllability of the world, and traumatic events typically shatter that worldview as we become shaken from our ordinary perceptions and are left to rebuild ourselves and our worlds.”

Back to Basics (2005) by The Shapeshifters
artists, lyrics, video, Wiki