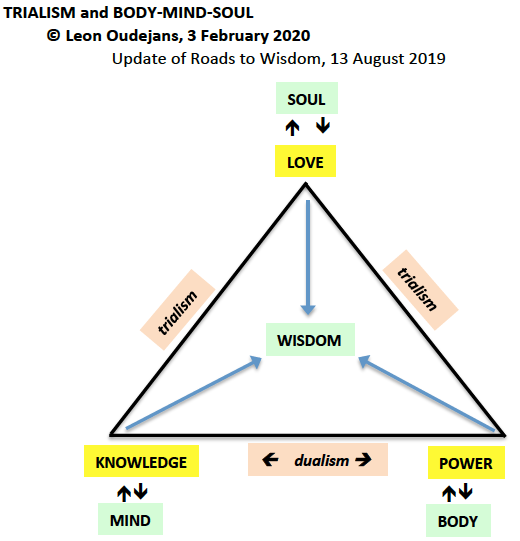 Having power is a threatening aphrodisiac

In last Tuesday’s blog, I wrote that having power is a threatening aphrodisiac. The aphrodisiac part is about wanting more and more because we believe that more is better (my blogs). However, in accordance with the ordinal utility or Pareto ranking in micro-economics, each “more” yields less additional (or: marginal) satisfaction and creates more indifference.

I suppose that (having) Power appeals to our Dark Side. One could argue that the Stanford prison experiment points to the (very) same. The balance to Power isn’t found in Knowledge. If anything, Knowledge equals Power. Only Love will provide a balance to Knowledge and to Power. This is the essence of my concept of trialism versus dualism (my blogs).

In order to visualize the above, I have updated the diagram in my 2019 blog The 3 roads to Wisdom.

Corruption first causes a flattening of the triangle (= trialism) into a straight line (= dualism) and then a convergence to a focal point: either Knowledge or Power (= monism).

Temptation (my 2016 blog) seems to be the main driver for this corruption. Temptation always seems linked to our Dark Side. Also see my blogs of 2015 and 2016.

There are several songs about the Power of Love. These songs suggest that Love can also corrupt. However, its lyrics often contradict with the title (eg, Frankie Goes To Hollywood, Huey Lewis, Jennifer Rush).

In my view, Love has no (corruptive) power. Love provides a (very) powerful feeling and is the only selfless belief of the 7 Belief systems. As often, semantics are important.

You’ve got to believe in love

It’s a feeling that’s next to none

Can’t stop until we are one

With the power of love

Tell everyone to try

I promise you’ll reach the sky

One thing that we can’t deny

Is the power of love