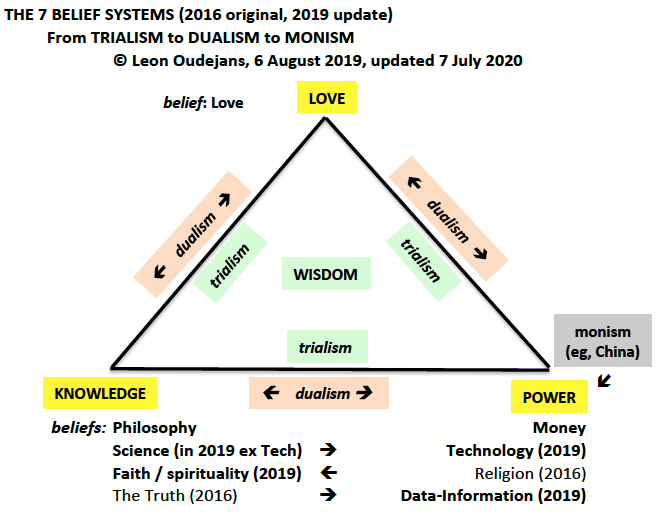 A belief system is the ultimate reason for sacrificing your own life for a Greater Good, or – alternatively – taking someone else’s life for that same reason. Belief systems drive human behaviour and vary over time. In 2016, I concluded that the 7 Belief systems were: Money, Politics and Religion (3x Power domain), Philosophy, Science (& Tech) and the Truth (3x Knowledge domain), and Love (both a domain and a belief).

The new Knowledge domain features 3 beliefs: Faith (or: spirituality), Philosophy and Science (excluding Technology). Out are: Tech and the Truth. Faith has replaced Religion.

Love is the only selfless domain and belief.

China’s migration from its ancient Hukou system to its 2020 Social Credit System, shows the importance of both Technology and Data / Information as new belief systems. The Truth has become obsolete now that Technology can make sure that Data/Info is the new official truth. In this context, it makes sense that Chinese history is being erased (eg, 1989 Tiananmen Square protests, any reference to Taiwan as an independent country).

These 7 Beliefs systems (of 2019) are a better reflection of societies like China today, and anywhere else tomorrow.

Don’t push too far your dreams are china in your hand
Don’t wish too hard, because they may come true
And you can’t help them
You don’t know what you might have set upon yourself
China in your hand