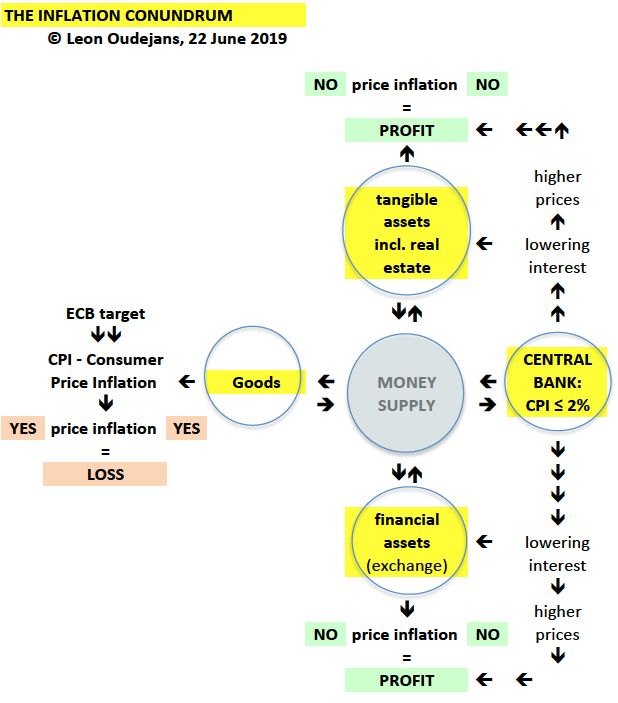 Last week, I got a question which had been on my own mind since June 22: how do you explain the rather obsessive ECB focus on 2% Consumer Price Inflation?? After ample consideration, I still couldn’t explain it. I could only explain the ECB quest for avoiding deflation. Hence, this blog is named the inflaton conundrum. Please see my diagram below for an illustration.

In times of deflation, goods are cheaper the next “day” and consumers can spend more by just waiting.

In times of HIGH inflation, good are more expensive the next “day” and consumers can thus spend less by waiting.

In times of LOW inflation – like now – inflation is almost irrelevant. There is no stimulus for buying early – or late.

The ECB monetary actions to expand money supply and reduce interest have – probably – mostly increased prices of real estate (tangible assets) and the prices of bonds and shares (financial assets). This translates in sky-high prices on stock exchanges and for real estate. Hower, these higher prices are deemed profits rather than (asset price) inflation.

Over time, the 3rd circle (ie, Goods) has – probably – become (much) smaller than the other 2 circles. Hence, the impact of monetary expansion in creating Consumer Price Inflation (CPI) has gradually diminished.

Following his quantitative easing a.k.a. monetary expansion, the ECB President has created a vastly inflated balance sheet which will once result in draconic losses when – and not if – interest levels will rise again and bond prices will drop. These losses will ultimately result in higher EU contributions by (key) member states and thus higher taxes of their inhabitants.

So, why did the ECB even bother about a Consumer Price Inflation between 1% and 3%??

The above paragraph might explain the pressure within the ECB to increase inflation and reduce EU cross-subsidization. The English philosopher and statesman Francis Bacon (1561-1626) would have said: “The cure / remedy is worse than the disease“. Perhaps, the ECB can’t see the forest for (through) the trees.