Experts are growing increasingly uneasy about both the quality and quantity of debt in the U.S. corporate sector as the amount of loans to borrowers with lower credit ratings and already high levels of debt is increasing.

A newly created index shows corporate debt levels are now even higher than before the dot-com bubble or the global financial crisis triggered by the 2008 collapse of U.S. investment bank Lehman Brothers.

Some experts warn that the ticking debt bomb in the U.S. corporate sector could eventually explode, triggering a new global financial meltdown.

In a speech delivered on May 20, Federal Reserve Chairman Jerome Powell sounded the alarm about rising levels of business debt, although he dismissed comparisons between the current situation and the conditions in U.S. mortgage markets before the financial crisis. 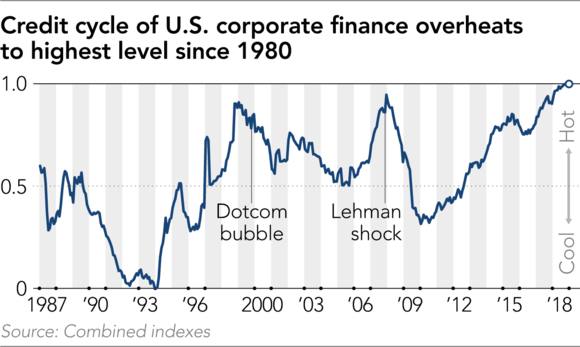 Views about the risks from rising corporate borrowing “range from ‘This is a return to the subprime-mortgage crisis’ to ‘Nothing to worry about here,'” Powell said. “At the moment, the truth is likely somewhere in the middle.”

One important concept for understanding the implications of corporate America’s borrowing binge for the financial system and the world economy is the credit cycle — the cyclical expansion and contraction of access to credit over time.

Many policymakers and market players are beginning to fear that the U.S. corporate credit cycle is approaching its peak and will soon enter a phase of contraction.

The International Monetary Fund has created a new index to visualize the credit cycle by integrating 18 relevant indicators, including those of corporate financing and investor behavior. Based on data for the years since 1980, the index gives a value of 1 to the highest point of the cycle and 0 to the lowest.

A chart of the index clearly points to very high levels of corporate borrowing, even higher than the peak points during the tech bubble and the housing bubble. “The US corporate credit cycle appears to be at its highest point in recent history,” the IMF said in its “Global Financial Stability Report,” released in April. The indicators show corporate debt is skewed toward lower-rated issuers, with leverage being close to cycle highs. 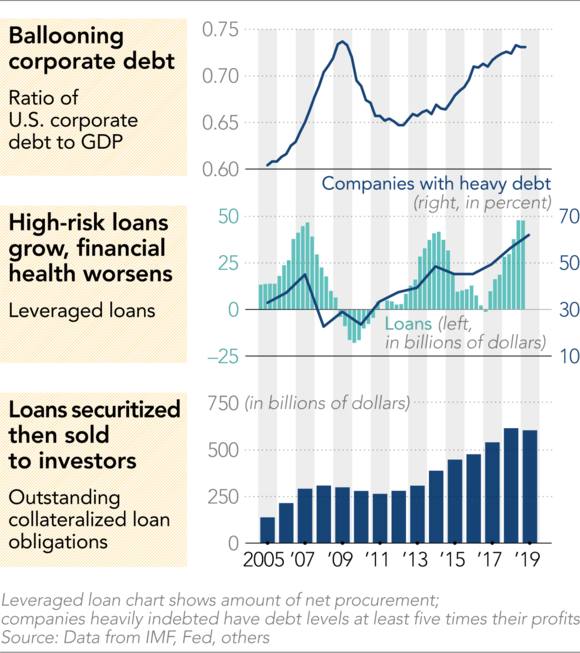 An extended period of easy credit has led to loose lending and investment standards, allowing even companies on a shaky financial footing to pile on debt.

In addition to capital investment to fuel future growth, companies are also spending heavily on such strategic moves as mergers and acquisitions and share buybacks.

As a consequence of the debt binge, a wave of downgraded credit ratings is sweeping the U.S. corporate sector, even hitting such blue-chip companies as General Electric and AT&T. GE’s debt has been downgraded to the triple-B range, the lowest invest-grade rating. For some time, investors feared that AT&T debt could be downgraded to junk status after the company assumed a debt load as high as $180 billion.

Such loans are often used to finance speculative M&A. The amount of leveraged loans extended during the first quarter of 2019 surpassed its peak before the financial crisis.

While the ranks of highly leveraged companies have grown, the loan terms to protect lenders have been relaxed.

Sales of a type of securities called collateralized loan obligations, used to pool bonds, loans and their derivatives into new debt, are ballooning, causing more individual savings to flow into high-risk corporate debt via mutual and pension funds.

The situation is disturbingly reminiscent of how subprime loans were packaged into mortgage-backed securities and sold to investors around the world during the housing bubble, setting the stage for the harrowing financial crisis.

That is not to say, however, that a new financial tsunami is gathering force. The ratio of corporate debt to gross domestic product in the U.S. is still not higher than the pre-crisis level.

With many listed U.S. companies showing strong earnings performances, the number of so-called “zombie companies” — those in need of being bailed out to keep operating — is on the wane.

Still, the high and rising level of corporate debt in the U.S. should be seen as a potential risk for the world economy.

If the economy takes a sudden lurch downward, swollen risky corporate borrowing would “amplify” the slowdown as bankruptcies and default would expand economic strains, the IMF warned in the report.

While the U.S. Federal Reserve maintained a tightening monetary policy bias until the end of 2018, the worry is about increased debt-financing costs leading to a credit crunch.

As the Fed has shifted its policy bias toward easing to shore up the economy, if necessary, in response to possible repercussions from the U.S. trade war with China, however, there are growing concerns about risks due to the Fed’s failure to act to curb risky corporate borrowing.

The Fed will be facing some tough challenges as it tries to guide the economy towards a soft landing by striking a good balance between tackling the problem of ballooning corporate debt and keeping the economy on an upward trajectory.”

Speech by Federal Reserve Chairman Jerome Powell as delivered on 20 May 2019: