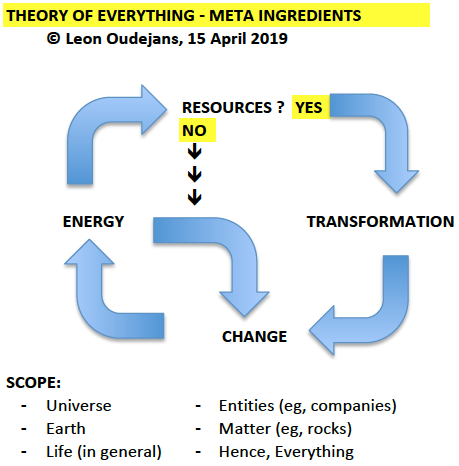 Theory of Everything (2) – the Flow

My recent blog on the Theory of Everything did not include my diagram below. My diagram is even more relevant for part 2 today. Since writing part 1, I have been wondering whether the arrows resulting from the meta ingredients Energy, Resources, Transformation and Change are representing a phenomenon in positive psychology called the Flow.

Nautilus, 4 April 2019: “Sure, you can go with the flow. But what does that mean? [] Engineers tell us flow describes how fluids or gases behave in relationship to their environment. [] Flow can be laminar (smooth) or turbulent (chaotic). But when it’s turbulent, scientists are baffled about what in the world’s going on. Then again, flow can be a transcendent feeling. It can lift you out of time, make you feel one with the universe. [] Scientists and writers may not be able to pin a definition on flow, but they love to allude to it.”

For me, the Flow equals (at least) phase 1: Energy. That energy comes in the shape of thoughts (eg, ideas, warnings). Such ideas may transform into art, music or writing when the receiver acts upon it.

I’m responsible for (not) following up on these thoughts. Some disappear quickly (eg, ideas) while others return several times (eg, warnings).

I’m not always connected to the Flow. Whenever I’m preoccupied (eg, moving house) then I’m disconnected.

I can’t explain how I “connect” to the Flow. I think, feel and believe it requires having an “empty” mind. Hence, the opposite of preoccupied.

Wiki: “In positive psychology, a flow state, also known colloquially as being in the zone, is the mental state of operation in which a person performing an activity is fully immersed in a feeling of energized focus, full involvement, and enjoyment in the process of the activity. In essence, flow is characterized by complete absorption in what one does, and a resulting loss in one’s sense of space and time.”

Wiki: “Named by Mihály Csíkszentmihályi in 1975, the concept has been widely referred to across a variety of fields (and is particularly well recognized in occupational therapy), though the concept has existed for thousands of years under other names, notably in some Eastern religions, for example Buddhism.” Note: bold and italic markings in quote by LO.