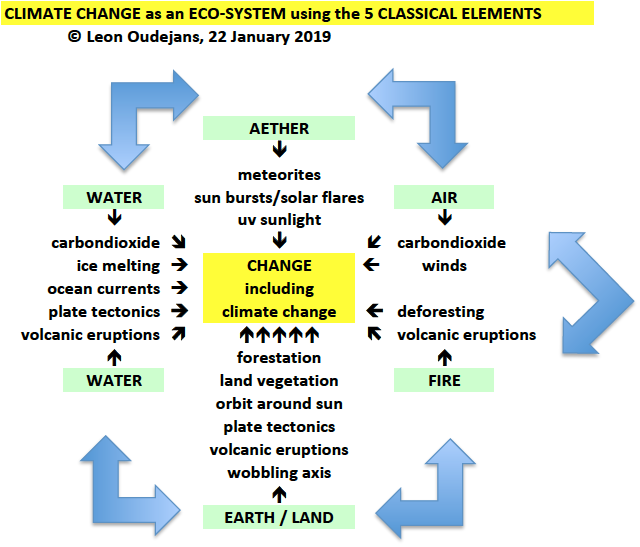 Climate change as an ecosystem

In my blog of 13 January 2019 on the Sahara swinging every some 20,000 years between a lush and a desert, I made two comments that are probably interlinked:

My 2nd comment is my belief, my opinion rather than a (scientific) fact. It also raises a question: Why would climate change even be an ecosystem?

Wikipedia defines an ecosystem as “a community of living organisms in conjunction with the nonliving components of their environment, interacting as a system”.

In this case, the living organisms are humans and the nonliving components are the 5 classical elements, being aether, air, earth/land, fire and water.

These 5 classical elements are a guarantee for permanent Change, including climate change. Change requires adaptation and improvement in order to survive as a species.

The alternative is death and extinction. Hence, there have been many human species before Homo sapiens. The Neanderthal even lived for some 800,000 years before they disappeared.

Nevertheless, the Neanderthal live on as they provide about 2% of contemporary human DNA, albeit only outside Africa. Homo sapiens has benefited from interbreeding with Neanderthal and Denisovans, “mostly within immune and skin pigmentation genes”. Interbreeding also caused some disadvantages to non-African populations: reduced reproduction and reduced fitness.

Seeing humans as fragile living organisms amongst these 5 classical elements is not an image that is on the mind of most humans. Shielded by our technology, we have distanced ourselves from nature and even from fellow humans. Scientists and Big Tech are looking for solutions that would increase our longevity and possibly even provide us with an eternal life.

Reasons, the reasons that we’re here

The reasons that we fear