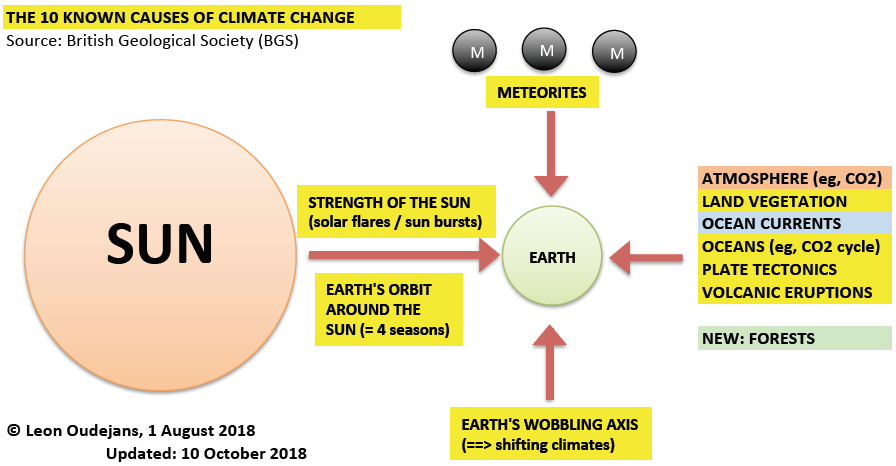 Bitcoin, a 100% human cause for climate change

Most of the 10 known factors of climate change (see picture), have no human involvement (BGS).

One climate change factor, greenhouse gases, stirs up lots of controversy about the degree of human engagement.

On 29 October 2018, a new study revealed an eleventh climate change factor that can be fully attributed to humans: Bitcoin mining.

Hence, the warning in the Guardian of 17 January 2018: “The cryptocurrency uses as much CO2 a year as 1m transatlantic flights. We need to take it seriously as a climate threat.”

Phys title: Bitcoin can push global warming above 2 C in a couple decades

“A new study published in the peer-reviewed journal Nature Climate Change finds that if Bitcoin is implemented at similar rates at which other technologies have been incorporated, it alone could produce enough emissions to raise global temperatures by 2°C as soon as 2033.

“Bitcoin is a cryptocurrency with heavy hardware requirements, and this obviously translates into large electricity demands,” said Randi Rollins, a master’s student at the University of Hawaii at Manoa and coauthor of the paper.

Purchasing with bitcoins and several other cryptocurrencies, which are forms of currency that exist digitally through encryption, requires large amounts of electricity. Bitcoin purchases create transactions that are recorded and processed by a group of individuals referred to as miners. Miners group every Bitcoin transaction made during a specific timeframe into a block. Blocks are then added to the chain, which is the public ledger. The verification process by miners, who compete to decipher a computationally demanding proof-of-work in exchange for bitcoins, requires large amounts of electricity.

The electricity requirements of Bitcoin have created considerable difficulties, and extensive online discussion, about where to put the facilities or rings that compute the proof-of-work of Bitcoin. A somewhat less discussed issue is the environmental impacts of producing all that electricity.

A team of UH Manoa researchers analyzed information such as the power efficiency of computers used by Bitcoin mining, the geographic location of the miners who likely computed the Bitcoin, and the CO2 emissions of producing electricity in those countries. Based on the data, the researchers estimated that the use of bitcoins in the year 2017 emitted 69 million metric tons of CO2.

“Currently, the emissions from transportation, housing and food are considered the main contributors to ongoing climate change. This research illustrates that Bitcoin should be added to this list,” said Katie Taladay, a UH Manoa master’s student and coauthor of the paper.

“We cannot predict the future of Bitcoin, but if implemented at a rate even close to the slowest pace at which other technologies have been incorporated, it will spell very bad news for climate change and the people and species impacted by it,” said Camilo Mora, associate professor of Geography in the College of Social Sciences at UH Manoa and lead author of the study.

“With the ever-growing devastation created by hazardous climate conditions, humanity is coming to terms with the fact that climate change is as real and personal as it can be,” added Mora. “Clearly, any further development of cryptocurrencies should critically aim to reduce electricity demand, if the potentially devastating consequences of 2°C of global warming are to be avoided.” ”