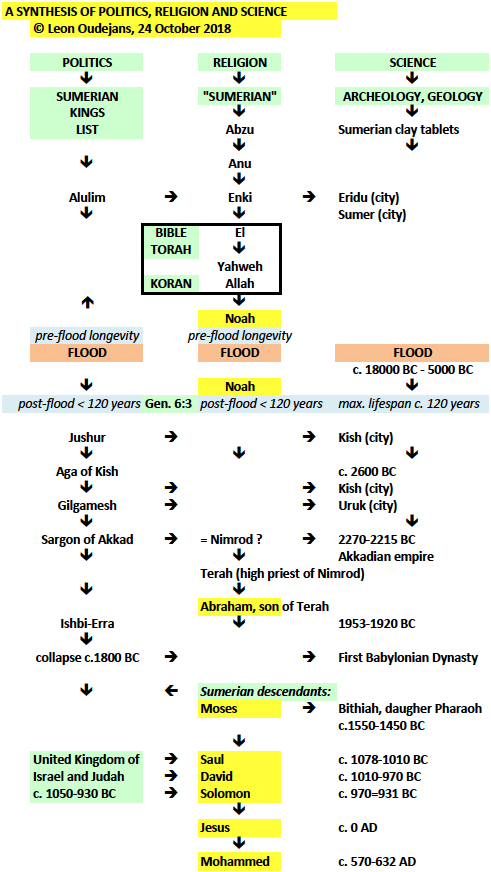 Nowadays, people are skeptical about many things, and especially about the Book of Genesis from the Old Testament. A comparison between Politics (Sumerian King List), Religion ((Hebrew) Bible), and Science (eg, post-glacial sea level rise, archeological finds) reveals similarities which hardly can be considered a “coincidence“.

A 1972 book by Thomas C. Hartman of the University of Wisconsin (“Some thoughts on the Sumerian King list and Genesis 5 and 11B“) stated the following:

“In recent years the number of studies comparing the early chapters of Genesis with materials from various ancient civilizations – Mesopotamia in particular – has proliferated“.

I found this quote as I noticed similarities between ancient events in Politics, Religion and Science (3 out of the 7 Belief systems).

Other remarkable similarities are: extreme pre-flood longevity, maximum post-flood lifespan of about 120 years.

It’s intriguing that all of our prophets have descended from royal Sumerian ancestry, including Jesus and Muhammad (my 2017 blog).

Wiki: “The term Sumerian is the common name given [by the] Akkadians. The Sumerians referred to themselves as [] “the black-headed people“, and to their land as [the] “place of the noble lords”. Note: bold marking by LO.

Last but not least, the scientific notion that there were no advanced pre-flood civilizations (ie, before 4000 BC), will once proven to be false. To some extent, secrets are buried in the Sahara desert (example). The “whitewashing” of Western history will then end (my 2017 blog).