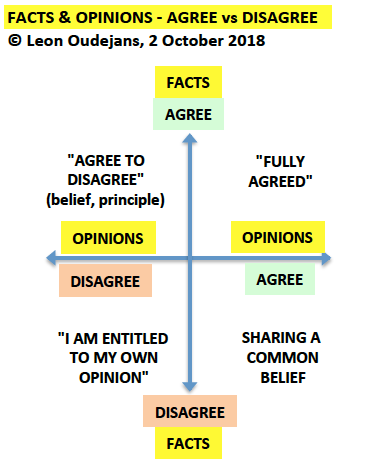 I’m entitled to my own opinion, am I??

I’m proud of my 2016 blog Why are opinions stronger than facts? My blog is the 1st Google result when you type that question. To some extent, this 2018 blog is a sequel to my 2016 blog. The diagram below shows the 4 situations when you agree or disagree with facts and opinions.

The phrase “fully agreed” is reserved for the top right spot: agreeing with facts and opinions. In our divisive societies, we tend to no longer agree with other opinions.

When we agree on facts but disagree on opinion then we differ in belief, principle, or view. To resolve such endless discussions, we may use the phrase “let’s agree to disagree“.

Sometimes, people find each other in common beliefs regardless of their (dis) agreeing with underlying facts. Disagreement on underlying facts is irrelevant as these people may share a Cause for a Greater Good.

Nowadays, there is a new phrase: “I am entitled to my own opinion“. In and of itself, this phrase appears correct. However, in such a case, people differ on opinions and on facts.

US Senator, ambassador, and academic Daniel Patrick Moynihan (1927-2003) had a perfect reply to that phrase: “Everyone is entitled to his own opinion, but not his own facts“. Please also see the related Aeon article and my blog: You don’t have a right to believe whatever you want to.

The problem with facts is that they are not eternally true; some facts are timeboxed.

Historical example: Less than 400 years ago, scientist Galileo Galilei (1564-1642) was sentenced in 1633 to lifelong house arrest for claiming that Earth was circling around the Sun (heliocentrism) while Religion still claimed that planet Earth was the center of the Universe.

Contemporary example: “For centuries, the Neanderthal was disparaged and painted as an ape-like brute with little relation to man. Guided by Church doctrine and racism, European scientists refused to admit they had anything in common with such a “primitive being.” (Forbes-2018). In 2018, the Neanderthal is being rehabilitated as the brother or cousin of Homo Sapiens (eg, Conversation, Science Advances, Smithsonian).

Even Albert Einstein (1879-1955) had scientific hypotheses (ie, beliefs) that only became facts after his death (Newsweek-2018). A 1953 Albert Einstein quote from “Neun Aphorismen” as included in the 1954 book “Essays presented to Leo Baeck on the occasion of his eightieth birthday”:

So let’s leave it alone, ’cause we can’t see eye to eyeThere ain’t no good guy, there ain’t no bad guyThere’s only you and me and we just disagree