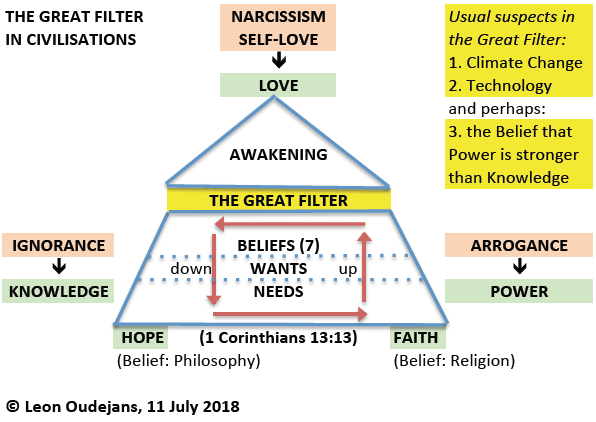 Knowledge = Power and the Great Filter in civilisations (5)

The Great Filter hypothesis (my 2017 blog) is one of the explanations to the Fermi Paradox (my 2016 blog). It argues that we have never found advanced and intelligent alien lifeforms because all life needs to overcome 2 basic thresholds: (i) Climate Change, and (ii) (inadequate) Technology (to leave the home planet in time). Also see: BI, Independent.

In the next hundreds or thousands of years, the Homo sapiens species will be in a similar position. We are likely to survive several extra degrees of global warming, but we are unlikely to survive a new Ice Age (global cooling). See my 2017 blog for its arguments.

So far, humans have organised several manned missions to the Moon, (ii) long-term human stay in the International Space Station, and (iii) unmanned (robotic) missions to other planets (eg, ESA, NASA). It may, however, take hundreds or thousands of years before we are able to leave this planet permanently.

In the meantime, externally induced disasters like asteroids/comets/meteoroids (my 2015 blog) and Climate Change continue to threaten the viability of human existence. Inadequate Technology to leave this planet in time, might be considered an internally induced reason.

In yesterday’s part 4, I argued that there might be a third – internally induced – reason for the Great Filter hypothesis: the Knowledge = Power notion.

The Love, Knowledge and Power domains in the 7 Belief systems are always threatened by narcissism, ignorance and arrogance.

It’s intriguing to explain Why. It might even be Nature’s way to contain the exponential rise of an advanced intelligent species.

“You start with billions and billions of potential germination points for life, and you end up with a sum total of zero extraterrestrial civilizations that we can observe. The Great Filter must therefore be powerful enough – which is to say, the critical steps must be improbable enough – that even with many billions of rolls of the dice, one ends up with nothing: no aliens, no spacecraft, no signals, at least none that we can detect in our neck of the woods.”