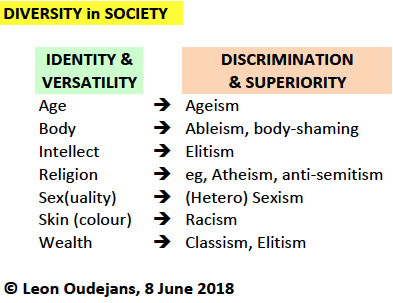 The pros and cons of diversity

My recent blog on diversity was rooted in an article by Sylvain Ephimenco, a gifted writer of Dutch newspaper Trouw. The article is about a rather fundamental change in opinion on diversity by the Dutch Scientific Council for Government Policy (WRR).

The 2007 WRR diversity report focussed on identity, identification with the home country, and social cohesion. The alleged benefits (ie, pros) were clear: “Various research shows that countries do well when they do well with diversity. Migration is the logic of the new economic order.” (Trouw-2007)

This change in opinion may be viewed as a contradiction but I think, feel and believe it is not. Diversity has its benefits (pros) and its drawbacks (ie, cons). Essentially, the pros of diversity are about identity and versatility. Unfortunately, “every advantage has its (own unique) disadvantage”, paraphrasing a famous Johan Cruijff quote.

My research on relevant “-isms” highlighted a little used one: ableism. “Ableism refers to the discrimination and prejudice towards people who are
physically or mentally challenged” (source).

My previous blog on diversity stated that diversity literally means “turned into two”. My diagram shows the 2 sides of the same (diversity) coin.

The tipping rather than flipping point between the 2007 and 2018 WRR diversity reports is in the words “too much“. The most popular Dutch proverb says: Overal waar ‘te’ voor staat is slecht, behalve ‘tevreden’. This literally means: Everything that starts with ‘too’ is bad, except for ‘satisfied’.

The strengths and weaknesses of diversity are well captured in this quote by Charles de Gaulle (1890-1970): “How can you govern a country which has 246 varieties of cheese?”