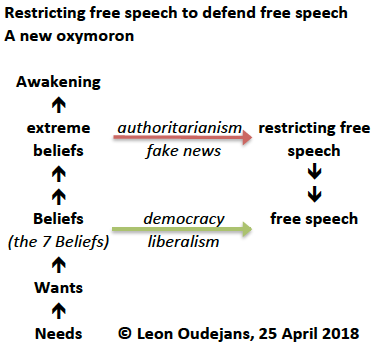 On 6 April 2018, the American liberal news organisation NPR published a newsletter with the intriguing heading: Should free speech be limited? Also see this liberal PBS 2013 article. The NPR topics caught my interest. Limiting free speech, in order to defend free speech, appears to be the newest weapon against disinformation, fake news, and hoaxes.

In March 2015, the EU decided to create the East StratCom Task Force “to address Russia’s ongoing disinformation campaigns”. Its website is called EU vs Disinfo and features an article about the Russian (pro-Kremlin) TV broadcaster RT, which may lose its UK broadcasting license.

In February 2018, the flipside of this EU initiative became clear. FT: “The site sparked criticism when it cited articles on the websites of Dutch media groups De Gelderlander, GeenStijl and The Post Online. After complaints by the publishers, Dutch MPs and the country’s liberal interior minister, EU vs Disinfo announced on March 8 that it was removing the pieces from its disinformation database.” Also see DutchNews.

Limiting free speech, in order to defend free speech, feels like an oxymoron (eg, jumbo shrimp, open secret). Wiki: “An oxymoron is a rhetorical device that uses an ostensible self-contradiction to illustrate a rhetorical point or to reveal a paradox“.

Philosophy (eg, democracy) and Politics (eg, Liberalism) are 2 of the 7 Belief systems. The other 5 Belief systems are Love, Money, Religion, Science and the Truth.

One of the perceived pillars of democracy is free speech.

Developing extreme beliefs is a mere consequence of having beliefs.

An extreme belief like authoritarianism doesn’t believe in free speech. It believes in undermining free speech through disinformation, fake news, and hoaxes.

The irony of authoritarianism is that they need democracy to gain power. Once in power, they “use the power [they] won in elections to essentially dismantle the country’s democracy” (eg, New Republic-2011). Feel free to identify the relevant countries.