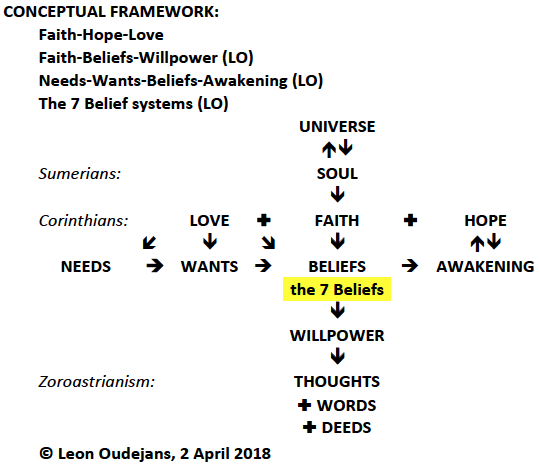 The 7 Belief systems – a conceptual framework

Since 2014, I have developed 3 concepts: the 7 Belief systems, Needs-Wants-Beliefs to which I later added Awakening, and Faith-Beliefs-Willpower. The diagram below integrates them into a bigger picture, a.k.a. a conceptual framework. These concepts also connect to ancient (religious) beliefs, like Sumerian beliefs and Zoroastrianism.

The natural – horizontal – order in Life appears to be (i) Needs (all life forms looking for food, shelter, water, etc.), (ii) Wants (species using tools), and (iii) Beliefs (humans only).

An Awakening is the final stage. However, human history suggests that this stage has never been achieved before, or might be unsustainable (my 2017 blog #1, my 2017 blog #2).

My diagram also features a vertical order that connects the Universe to Earth’s Nature, including (human) Life. The linking pin between both is the soul. According to ancient Sumerian beliefs and subsequent religious beliefs, the soul (a.k.a. breeze, breath) is a divine human component that marks life (first breath) and death (last breath). While alive, the soul can “travel” during our sleep (my 2017 blog).

Without Faith and Willpower, our Beliefs may be nothing more than thoughts. Willpower is required to execute beliefs into deeds. Willpower is usually short-lived without faith (a.k.a. conviction) in our beliefs. I think, feel and believe that our faith is powered by our soul.

The 7 Belief systems are the core of this framework. They give 7 reasons to sacrifice your (own) life for a Cause, being Love, Money, Philosophy, Politics, Religion, Science, and/or the Truth.

“Live your beliefs and you can turn the world around”. A quote by Henry David Thoreau (1817-1862), American philosopher. It should be noted that this quote also supports extreme beliefs.