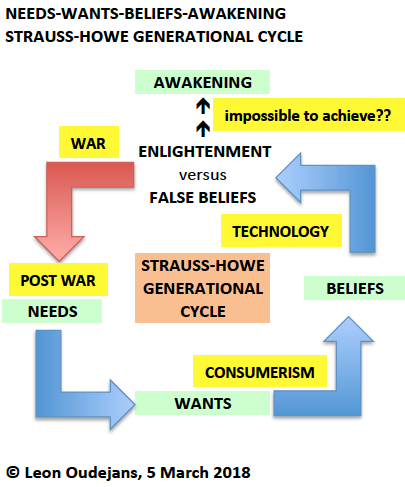 In the December 2016 issue of Wired magazine, 44th President Obama wrote an essay in which he stated: “Because the truth is, if you had to choose any time in the course of human history to be alive, you’d choose this one.” In his 2018 book “Enlightenment Now”, Steven Pinker mentions the 4 underlying drivers for this view: Reason, Science, Humanism, and Progress.

Steven Pinker‘s positive worldview drew heavy criticism from John Gray (Guardian) and Nassim Nicholas Taleb (New Statesman). Guardian-2015: “A new orthodoxy, led by Pinker, holds that war and violence in the developed world are declining. The stats are misleading, argues Gray – and the idea of moral progress is wishful thinking and plain wrong.”

In my view, both views are equally valid because their angle is quite different.

One looks at today and sees a general state of Enlightenment. The other view looks at history and argues that future military conflict is likely. Both views differ on the probabilities of war.

My diagram to the left visualizes both views and adds my own concepts of Needs-Wants-Beliefs (my blogs) and Awakening (my blogs).

In my diagram, Awakening is an enduring stage while Enlightenment is a temporary state.

However, the rise and fall of civilizations suggests that enduring Awakening is impossible to achieve – unlike temporary Enlightenment.

In the absence of an enduring Awakening, the Strauss-Howe Generational Theory (my 2017 blog) appears to connect all phases and/or stages. The only variables are space (ie, location) and time (ie, duration of phases / stages) but the probabilities seem certain rather than uncertain.

The era of Enlightenment is indeed clearly visible once you maintain a positive worldview, like Steven Pinker and others. However, I’m also a realist and the simultaneous era of False Beliefs is worrisome to me. False Beliefs now even extend to our elected leaders, like the 45th President.

“Beware of false knowledge; it is more dangerous than ignorance.” A quote by George Bernard Shaw (1856-1950), an Irish playwright.

Enlightenment, don’t know what it is
It’s up to you, the way you think