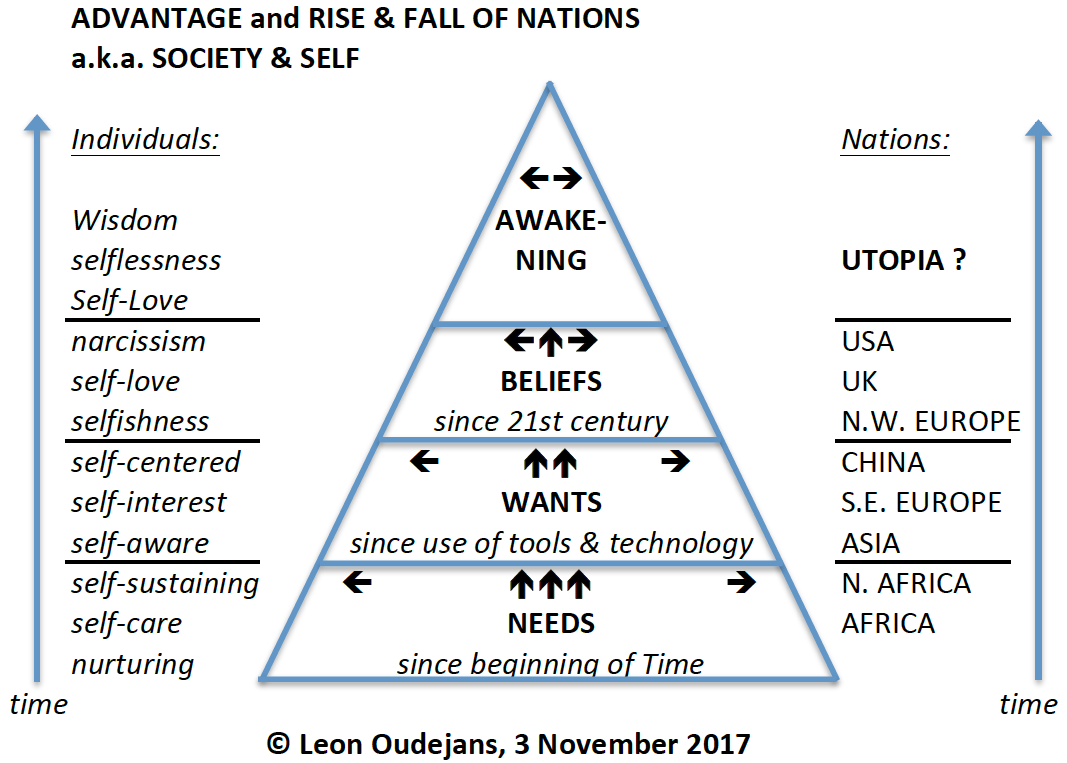 The rise and fall of nations (4)

I’ve always been fascinated by the rise and fall of civilizations and nations (blog 1, blog 2, blog 3). While writing last week’s blog, Use somebody, I used geographical locations to illustrate my concept of Needs, Wants & Beliefs (eg, my 2016 blog). Apparently, that was a 1st time. Then I realised that the life cycle of individuals (ie, cradle to grave) may resemble the life cycle of nations. My diagram combines both perspectives.

Individual persons can – and will – migrate to the level of Awakening, including Wisdom. In each society, they will, however, be a numerical minority although their influence may well exceed their numbers.

Societies may rise from Needs to Wants to Beliefs. Apart from the fictional Utopia, I’m not aware of any society which was able to migrate to the Awakening stage and stay there.

There is a biblical proverb, Proverbs 16:18, which seems to be applicable to my diagram: “Pride goes before destruction, a haughty spirit before a fall”. The modern abbreviation “pride comes before a fall” is probably better known (NL: hoogmoed komt voor de val). In the Beliefs stage, pride and arrogance play a dominant role in societies.

Obviously, civilizations and/or societies can also fall before the Beliefs stage, for instance by military conflict or pandemic diseases, like the Black Death (my 2017 blog). Examples: Aztec, Eastern Roman or Byzantine Empire, Chinese Empire, Maya. Also see my 2015 blog on (the history of) Superpowers. China shows that a fall does not need to be permanent.

My diagram contains 3 geographical regions in the Beliefs stage: North-West Europe, UK and USA. South and East Europe may still be able to mitigate the influence of Beliefs in North and West Europe. The UK and USA have already entered a path of destruction and failure, mostly following pride and a haughty spirit.

Even, the Russian interference with the 2016 US presidential election may relate to gullibility: “the quality of believing in things too quickly. Someone with a lot of gullibility can be easily tricked”. UK’s Brexit is another example of gullibility. As of result, both the UK and the USA show a staggering amount of disruption, chaos and destruction (my blog 1, blog 2).

“Tell people there’s an invisible man in the sky who created the universe, and the vast majority will believe you. Tell them the paint is wet, and they have to touch it to be sure.” Quote by George Carlin (1937 – 2008), American stand-up comedian, actor, author and social critic.