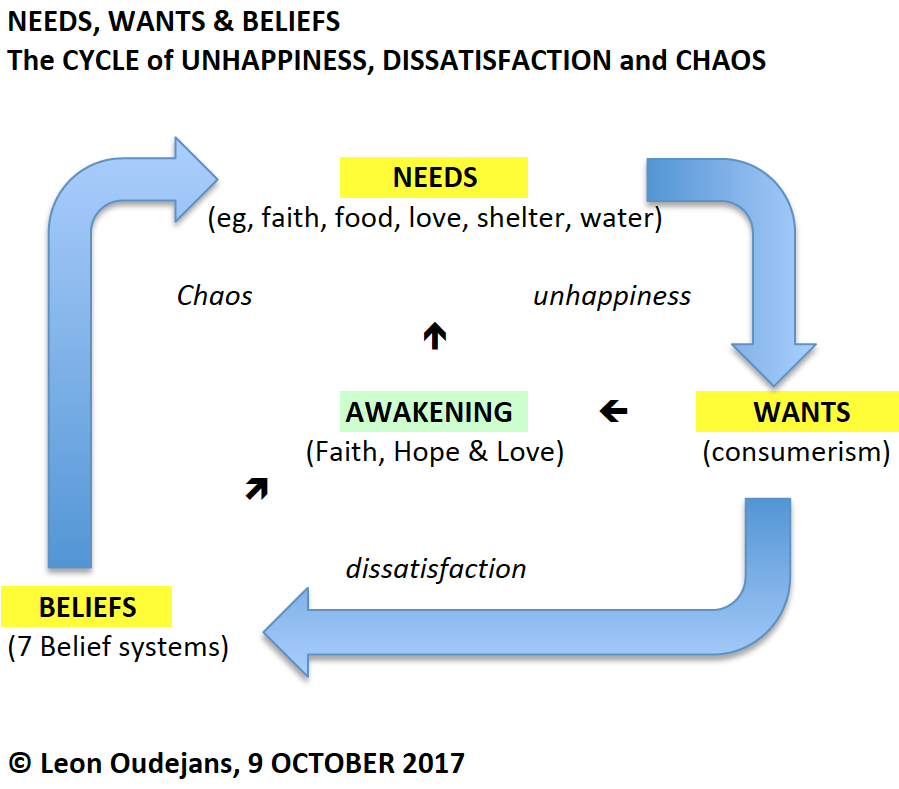 The cycle of unhappiness, dissatisfaction and chaos

In recent years, research has found a positive correlation between a feeling of happiness and religion: Big Think (2017), Journal of Religion and Health (2017), Pew Research Center (2016), Psychology Today (2015), PT (2012), WaPo (2015). Given the ample evidence on this positive relationship, the reverse is likely also to be true: less religion = less happiness.

The secularization of Western societies caused a sharp decline in public displays of Christian faith (eg, church attendance). The surge in consumerism (the Wants stage) and the decline in Religion appear to have happened simultaneously. It’s like a swing from (immaterial) spiritualism to materialism. The rising unhappiness could however not be repaired by more consumerism. That was the moment where dissatisfaction started.

Dissatisfaction could be repaired by decreasing consumerism. This could even explain the ongoing decline of the global retail industry (eg, my 2017 blog, my 2016 blog). Dissatisfaction could also be repaired by embracing religious faith again. Latter could be an explanation why more and more homes have public displays of religion (eg, Buddha statues).

Dissatisfaction could also be repaired by replacing religious beliefs for other beliefs (the Beliefs stage). The resultant is my concept of the 7 Belief systems, and its selfish beliefs and dimensions, being Knowledge (Philosophy, Science, the Truth) and Power (Money, Politics, Religion). Love, is the only selfless belief and (probably) dimension (my blogs: # 1 and # 2).

I’m concerned that the above may resemble a cycle of Needs, Wants & Beliefs, which is triggered by unhappiness (eg, secularization) and dissatisfaction (eg, consumerism).

A cycle would imply returning to its starting point (Needs). The trigger for that seems to be Chaos, culminating in military conflict (war).

Examples in human history seem to confirm this cycle. The chaos which is building around the world suggests that we have entered its final loop.

Only an Awakening (my blogs) and a renewed focus on Faith, Hope & Love (my blogs) could interrupt this cycle.