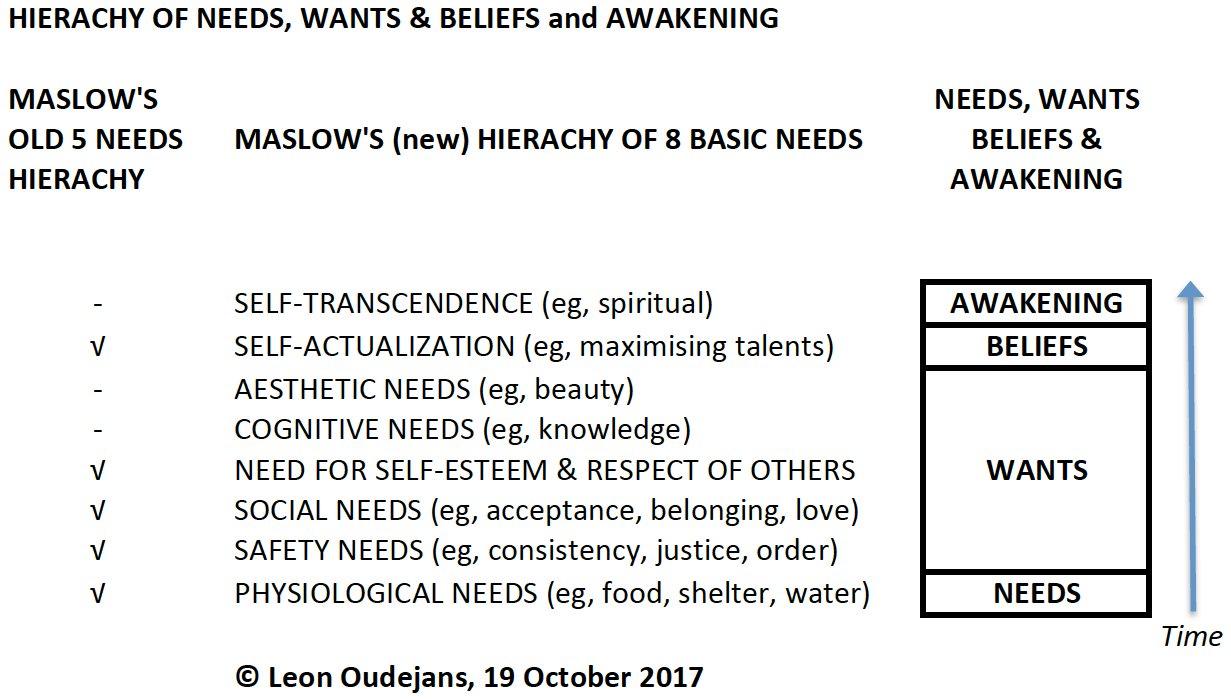 Feel the need in me

Recently, I noticed a 2017 Big Think article mentioning an unpublished 1966 update by Abraham Maslow to his famous Hierarchy of basic human needs. Maslow’s pyramid was part of a paper called “A Theory on Human Motivation“, which was originally published in the magazine Psychological Review in 1943.

The (unpublished) 1966 update adds 3 layers. “Maslow later divided the top of the triangle to add self-transcendence which is also sometimes referred to as spiritual needs. Spiritual Needs are a little different from other needs, accessible from many level. This need when fulfilled, leads to feelings of integrity and take things to another level of being.” (source)

In my first (2016) blog on Needs, Wants & Beliefs, I did notice that the 1st layer of physiological needs of Maslow’s hierarchy of basic human needs reconciles to my first layer of Needs. I failed to realise that Maslow’s 2nd, 3rd, and 4th layer reconcile to my second layer of Wants, and that the 5th Maslow layer (self-actualisation) is nothing else than a (eg, philosophical, religious) Belief.

In any language or territory, only food, rest, shelter, sex, warmth and water are considered basic human (a.k.a. physiological) needs. Anything beyond that must be a Want, or – perhaps – a Belief. The (unpublished) 1966 update, and its introduction of self-transcendence as a new top layer, made me realise that Maslow’s use of the word “need” is actually misleading.

Hence, I prepared a diagram reconciling the various – 1943 and 1966 – layers of Maslow’s hierarchy of basic human needs to my concepts of (i) Needs, Wants & Beliefs and (ii) Awakening.

This reconciliation supports my 22 May 2017 view that Awakening might just be the top layer of my Needs, Wants & Beliefs concept.

My diagram feels complete and does not leave reconciling items.

Apart from the 1st layer, no other Maslow layer qualifies as a basic human need in order to survive. In non-Western terminology (eg, Kenya), most layers qualify as Wants. Self-actualisation is not a Want but a (eg, philosophical) Belief. The 2017 Big Think article describes self-transcendence as a “sense of meaning, purpose”. This would indeed fit with an Awakening.

The original 1943 title of Maslow’s paper says it all: it’s a hierarchy of human motivation.