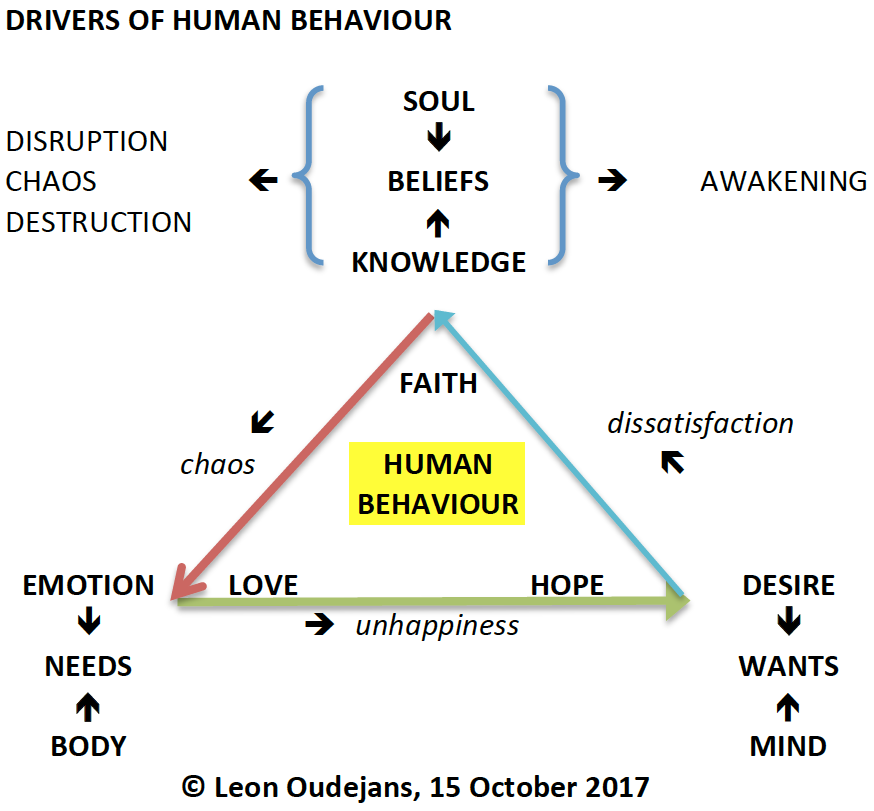 A quote by the ancient Greek philosopher Plato (428 BC-348 BC) has long been on my list of topics: “Human behaviour flows from three main sources: desire, emotion, and knowledge.” (book)

These 3 sources of human behaviour appear to be similar to the 3 stages in my concept of Needs, Wants & Beliefs (my blogs).

My diagram to the right, also connects these 3 sources and 3 stages to the concept of Body, Mind & Soul (my blogs).

There seems to be a logical (time) direction and/or sequence, which is represented by the cycle of unhappiness, dissatisfaction and chaos (my recent blog).

I must admit that my diagram is a little gloomy as it seems to represent an endless loop in human behaviour. There is, however, always an exit which I refer to as an/the Awakening (my blogs). The current general level of dissatisfaction and chaos suggests that we are somewhere at the top of the pyramid and that we need to make a choice.

Plato’s 2nd source of human behaviour, Desire, includes the Nature versus Nurture debate. British geneticist Adam Rutherford in Nat Geo, 14 October 2017: “There is a genetic basis to human behaviors. But there is also an environmental component. We used to say nature versus nurture. But we might say nature via nurture. [] It’s perfectly possible for two people to have identical genomes and one of them to be schizophrenic and the other one not.”

I suppose that part of my writing is directed towards a human Awakening. This may also explain my regular use of a famous Albert Einstein quote: “Only two things are infinite, the universe and human stupidity, and I’m not sure about the former.”