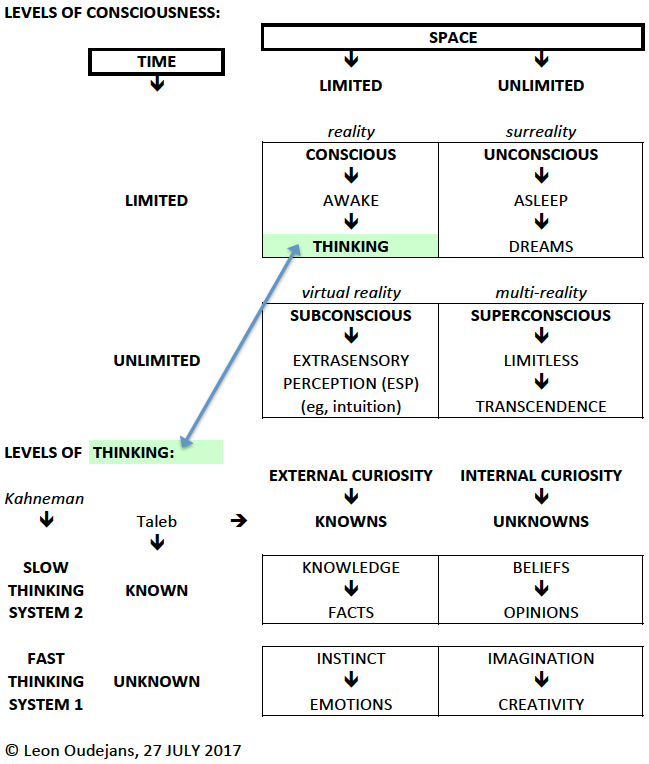 Levels of consciousness and thinking

Yesterday, I stumbled on a new word – superconscious. This stirred up my internal curiosity as I realised that superconscious was #4 in a row of 3 others: conscious, subconscious and unconscious. The “levels of consciousness” in Wikipedia is quite an interesting starting point.

After some reflection, I realised that the conscious level has a direct connection to my 21 July 2017 diagram on human intelligence – or thinking. I decided to prepare a new diagram outlining the levels of consciousness and the levels of (human) thinking – or intelligence.

Homo sapiens is mostly at the limited level of consciousness: thinking and dreams.

Some people have special abilities which we usually refer to as extrasensory perception – or ESP. I suspect these abilities arise from the subconscious which volume is – allegedly – 10 to 30,000 times more powerful than our conscious.

Wiki: “The term [ESP] was adopted by Duke University psychologist J. B. Rhine to denote psychic abilities such as intuition, telepathy, psychometry, clairaudience, and clairvoyance, and their trans-temporal operation as precognition or retrocognition.

Super- or higher consciousness is a “transcendental reality”. Wiki: “it has ancient roots, dating back to the Bhagavad Gita (recited 5119 years ago) and Indian Vedas.”

Humanoid sapiens, the descendants of Homo sapiens, will probably be the 1st human species entering the unlimited dimensions of Space and Time, a.k.a. the superconscious.

The diagram above details Thinking as a sub diagram of Consciousness. This suggests that the 3 other levels of consciousness may also have a more detailed sub diagram. I will start working on those. My diagram does not include the labels voluntary and involuntary consciousness. Nevertheless, this distinction occurred to me as a sudden line of thought.

I am pleased and proud to present this epiphany to you.