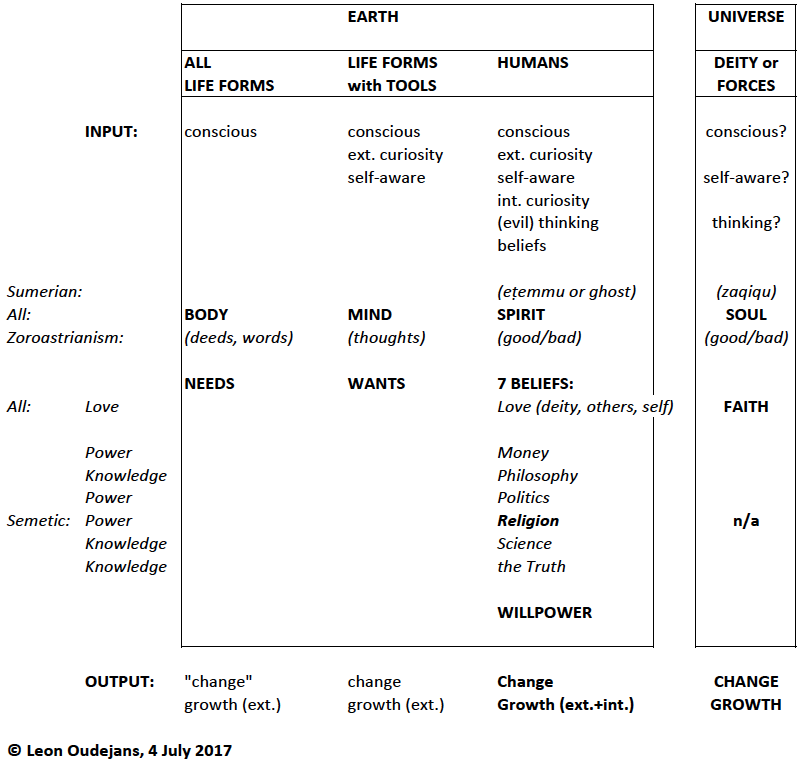 Today, I present an update of my Conceptual Framework. It integrates my various concepts: (1) the 7 Belief systems, (2) Needs, Wants & Beliefs, and (3) Faith, Beliefs & Willpower. I am still not yet sure if Awakening is a separate concept.

My diagram separates the earthly from the divine. This separation also clarifies the difference between Faith, rooted in Love, and Religion, rooted in Power (my 2016 blog). It integrates the ancient Sumerian religious beliefs and Zoroastrianism which both underpin the current Abrahamic or Semitic religions, being modern Judaism, Christianity, and Islam.

My Needs, Wants & Beliefs concept argues that all life forms are conscious and in the Needs stage (eg, food, sex, water). Only life forms using tools are self-aware with external curiosity and migrated to the Wants stage. Humans are the only thinking life form with internal curiosity and migrated to the Beliefs stage (my 2017 blog). Humans follow these 7 Belief systems: Love, Money, Philosophy, Politics, Religion, Science and the Truth.

The most intriguing additions are at the right side of my diagram. Scientists are warming up to a conscious universe, a self-aware universe, and a (thinking) mind of the universe. This ancient philosophic and current scientific view is called panpsychism: “the view that consciousness, mind or soul (psyche) is a universal and primordial feature of all things.” The resemblances between a human brain and the Universe are also fascinating (eg, LiveScience, Quora).

The above would have far reaching consequences.

The scientific “winning lottery ticket” theory, for Earth’s creation of Life, would no longer apply because Earth and the Universe would mirror each other.

Extraterrestrial life would become a near-certainty but perhaps in a Multiverse or parallel universes.

This diagram shows the best that I’ve currently got. It’s part of my Awakening.

I am happy sharing it with you.