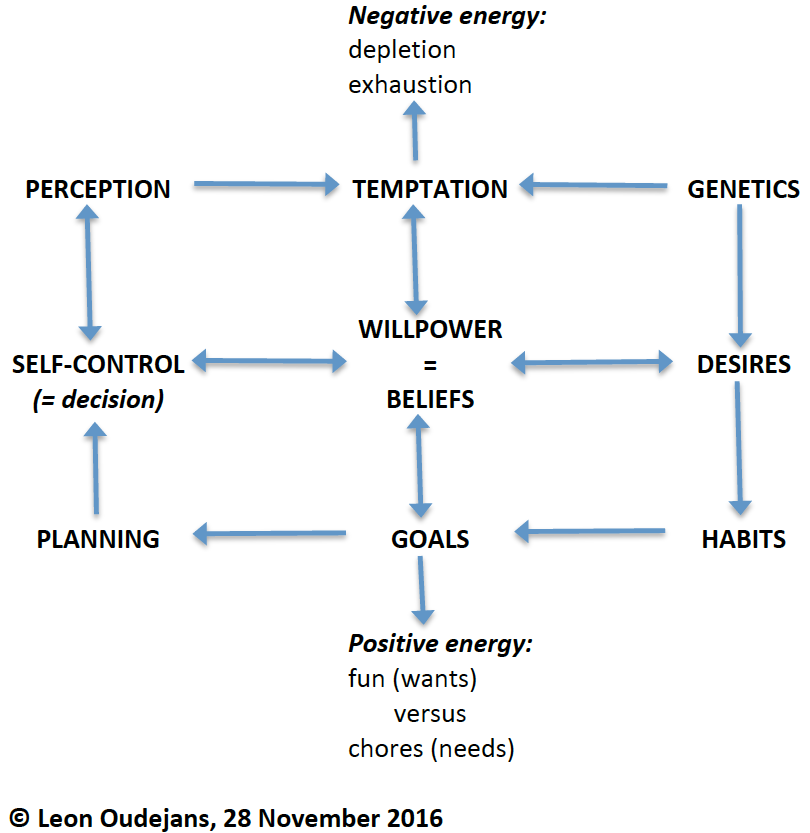 On 24 November 2016, the news and opinion website Vox published an intriguing article: The myth of self-control. Its message is in its subtitle: “Psychologists say using willpower to achieve goals is overhyped.” Sometimes, you just feel and know that it’s Bingo!

I had to read the article twice as it contains lots of concepts that I have used in my blog articles: desires, genetics, goals, habits, money, needs, perception, self-control, temptation, wants, and willpower. I made a mind map to digest its information and I would like to share it with you.

The most intriguing part for me was the realisation that willpower is the execution of your beliefs. You cannot change your habits (eg, smartphone / social media addiction, smoking) if you do not genuinely believe in changing your habits.

Addictions are like zero-sum games: stopping an addiction brings little gain and lots of loss.

Example 2: I control my addiction for eating liquorice candy (NL: drop) by perceiving and then believing that it causes unpleasant health effects. It’s a mental trick but it works.

When reading this Vox article, I did not expect finding a relationship with my concept of Needs, Wants and Beliefs. Now I see that willpower is hard because it requires believing – and faith. It is easier to believe in others than in yourself. Without believing in yourself, you will never have the willpower to change. Change requires Faith. Faith builds Beliefs. Beliefs give the Willpower to Change.

Example 3: I have come a long way in my studies and work by seeing and believing that the people “above” me, were not “better” than me. I believed that I could perform at least the same – or better. My belief gave me the willpower to excel. Obviously, I did meet people who were genuinely “better” than me. I think, feel and believe those instances kept me “grounded“.

I, I live among the creatures of the night

I haven’t got the will to try and fight

Against a new tomorrow, so I guess I’ll just believe it