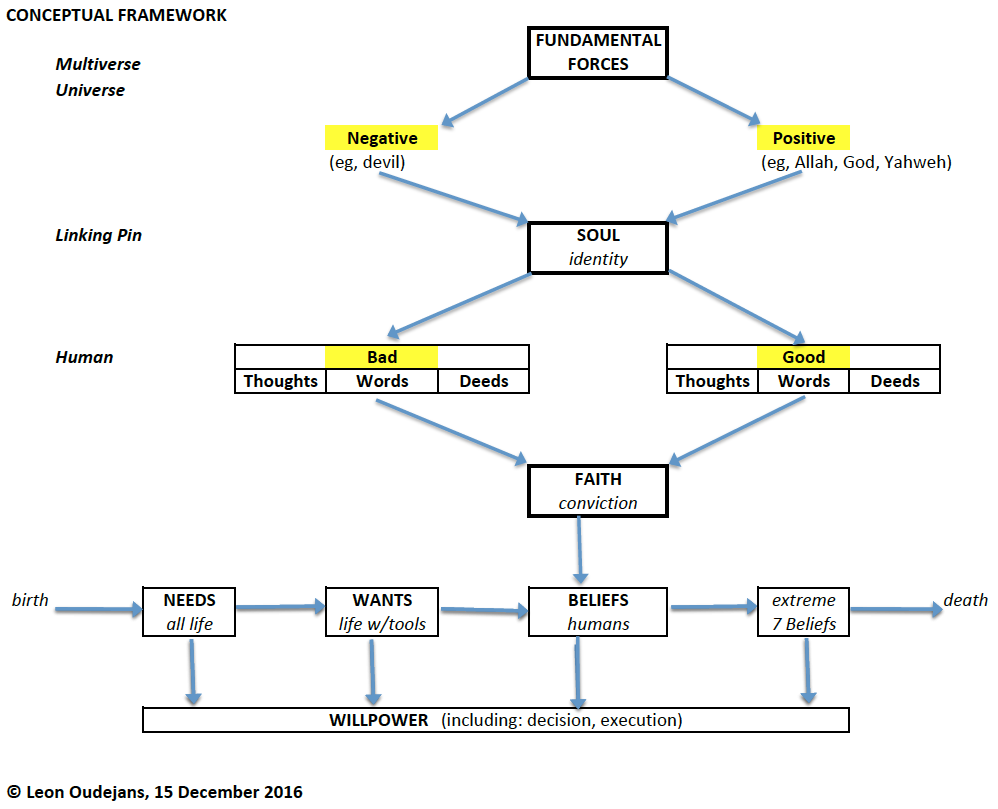 Since 12 March 2015, I have been writing about human belief systems. After adding Love in April 2015, this resulted in my concept of the 7 Belief systems, including its Knowledge and Power domain and Wisdom in its core.

On 4 April 2016, I started writing a book on this concept. While writing, I realised that I had only scratched the surface. I stopped writing and started looking for the missing pieces. This resulted in a 2nd, larger, concept called Needs, Wants & Beliefs in my blog of 19 September 2016.

My blog on Time & Space (1) made me realise that my 2nd concept only addressed Time while Space was missing. My 2 December 2016 blog on Faith finally resulted into my 3rd concept Faith, Beliefs & Willpower in my blog of 3 December 2016 which includes both Time & Space.

My recent blog on soulmates was partly based on my early 2016 interest in Zoroastrianism as a predecessor of the main 3 Abrahamic religions, being Judaism, Christianity and Islam. I think, feel and believe that our soul is the linking pin between our dimension of Time & Space and dimensions unknown to us (eg, multiverse).

The diagram below is the result of the above. Its top layer is an assumption and outlines my current beliefs. To a large extent, this diagram is based on the principles of Zoroastrianism. Some people claim that its dualism (devil vs God) is in between polytheistic and monotheistic religions. I reject that claim. All religions are ultimately based on this dualism (negative vs positive forces).

This diagram also shows that the conceptual similarities between religions are far more relevant than its differences.

This is also the main reason why I prefer Faith (in mind) over man made Religion (in appearance).

The moment of reckoning will not be about our individual choice of religion but will only be about whether we lived a good life – or not.

If anything, I am impressed by the symmetry, elegance, and simplicity of this diagram which are often at the heart of Physics (eg, PDF).