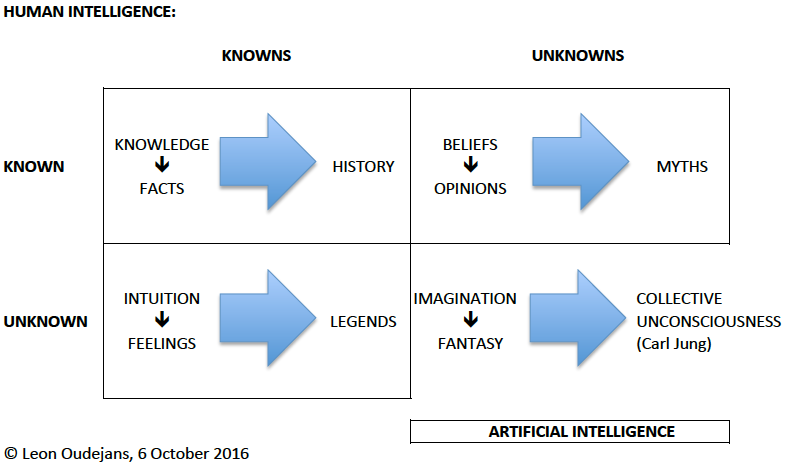 An intriguing 29 September 2016 article in Scientific American, by Julien d’Huy, reminded me of my 21 April 2016 blog, called History, Legends and Myths. I would like to repeat its opening line from J.R.R. Tolkien‘s book The Lord of the Rings: “And some things that should not have been forgotten were lost. History became legend. Legend became myth. And for two and a half thousand years, the ring passed out of all knowledge.”

Julien d’Huy: “Folklorists, anthropologists, ethnologists and linguists have long puzzled over why complex mythical stories that surface in cultures widely separated in space and time are strikingly similar. [] Carl Jung, the founding father of analytic psychology, believed that myths appear in similar forms in different cultures because they emerge from an area of the mind called the collective unconscious.” Also see Wikiversity. Note: italic markings are mine.

Wiki: “Collective unconscious, a term coined by Carl Jung, refers to structures of the unconscious mind which are shared among beings of the same species. According to Jung, the human collective unconscious is populated by instincts (LO: “unknown knowns“) and by archetypes: universal symbols such as the Great Mother, the Wise Old Man, the Shadow, the Tower, Water, the Tree of Life, and many more.”

Julien d’Huy: [The Cosmic Hunt myths] “are nearly absent in Indonesia and New Guinea and very rare in Australia but present on both sides of the Bering Strait, which geologic and archaeological evidence indicates was above water between 28,000 and 13,000 B.C. The most credible working hypothesis is that Eurasian ancestors of the first Americans brought the family of myths with them.”

The Australian link is interesting as recent research showed that “Aboriginal people appear to be the oldest living civilization on the planet outside of Africa. After an exodus some 72,000 years ago, they split away from the larger genetic group (along with their future neighbors in Papua New Guinea) 58,000 years ago and arrived on the Australian continent around 8,000 years later. They’ve been there ever since, giving them the longest known ties of any culture to a single place.” (eg, WP)

The phylogenetic research by Julien d’Huy “provides compelling new evidence that myths and folktales follow the movement of people around the globe. It reveals that certain tales probably date back to the Paleolithic period, when humans developed primitive stone tools, and spread together with early waves of migration out of Africa. [] My phylogenetic studies also offer insights into the origins of these myths by linking oral stories and legends passed down from generation to generation to motifs that appear in Paleolithic rock art images.”

Accidentally, I opened my 30 April 2016 blog on the Origin of Beliefs. This blog suddenly makes me realise that beliefs and myths are connected.

This brings an unexpected categorisation like human firmware: history, legends, myths and even the collective unconsciousness concept.

I am very surprised by this outcome. It again shows the beauty of interconnectedness.