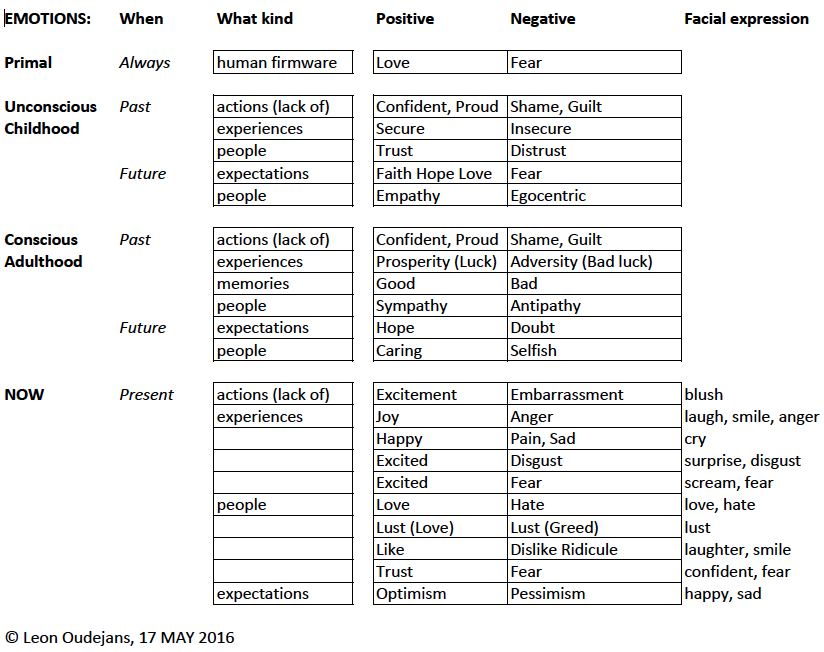 Most positive and negative human emotions have now been covered in my blogs. My 16 May 2016 blog on shame was quite overdue, in retrospect. Remarkably, I now notice that a blog on lust is still missing, perhaps because of false shame (Wiki).

Our primal or evolutionary emotions are stored in our human firmware and are largely outside our influence (eg, unknown knowns, unknown unknowns). Our childhood memories are long-term, often unconscious, the result from a happy or unhappy childhood, and are often hard to understand and/or influence. Our adulthood emotions are the ones that we are most conscious about. The last category of human emotions are the ones that are most familiar to us as we notice them each day through facial expressions (eg, conversations, TV).

Understanding the origin of your negative emotions is key in successful remediation and especially as you may be tempted to repair something which isn’t even broken. Human fears are often irrelevant evolutionary left-overs (eg, heights, insects, (lack of) open spaces, water). Our mostly unconscious childhood emotions might be the most dangerous ones (eg, lack of love).

Sweet child in time, you’ll see the line
Line that’s drawn between the good and the bad
See the blind man shooting at the world
Bullets flying, mm taking toll
If you’ve been bad – Lord I bet you have
And you’ve not been hit oh by flying lead
You’d better close your eyes, aahaao bow your head
Wait for the ricochet