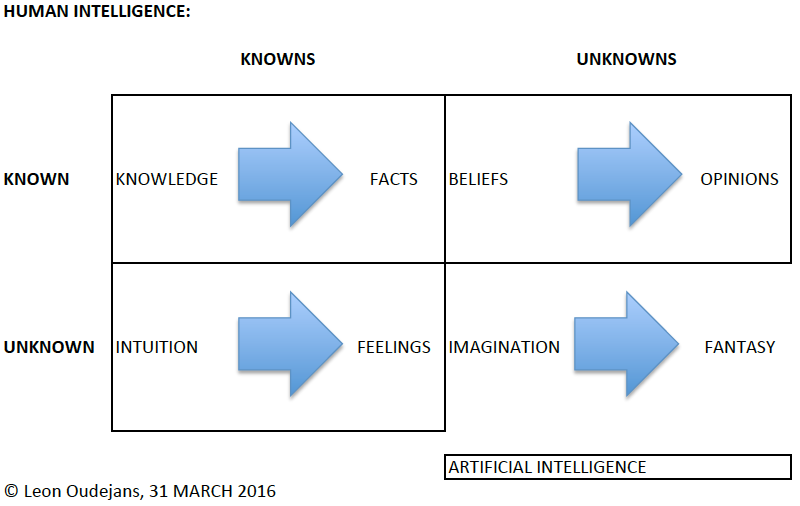 My 2009 Terratec Noxon internet radio has a persistent problem in establishing an effective internet connection, whether wired or with wifi. A firmware upgrade might do miracles but I haven’t been able to perform this trick even when the internet connection was still working. Essentially, this device has become economically useless although it still operates from a technical perspective.

The firmware in electronic devices has a human equivalent in evolutionary psychology which is often referred to as the Savanna Principle (Kanazawa, 2004b), or the evolutionary legacy hypothesis (Burnham & Johnson, 2005), or the mismatch hypothesis (Hagen & Hammerstein, 2006).

The “known knowns” and “known unknowns” domains are based upon education (knowledge and facts), social environment and upbringing (beliefs and opinions).

The human firmware is located in the domains of the “unknown knowns” (intuition and feelings) and the “unknown unknowns” (imagination and fantasy). Our human firmware took some 7 million years to establish but the last 250 years show a huge change compared to the previous 6,999,750 years.
Prior to the Industrial Revolution (1760-1820/1840), societies did not experience large rural-urban migration flows primarily due to the inability of cities to support large populations. Lack of large employment industries, high urban mortality, and low food supplies all served as checks keeping pre-industrial cities much smaller than their modern counterparts (excerpt from my 14 March 2016 blog). Essentially, human life could then still be compared to the ancient life of hunter/gatherers.

The rapid changes of the Technological Revolution (1800-2100) and global urbanisation may create serious challenges to the human firmware. An interesting example of this challenge is the 2016 study “How intelligence, population density, and friendship affect modern happiness” which caught quite some media attention (eg, DailyMail, HuffingtonPost, WP) due to its conclusion.

It’s hard for me not feeling a Catch-22 in that conclusion.

Excuse me for a while

And I’m so damn caught in the middle

I’ve never been so wrong