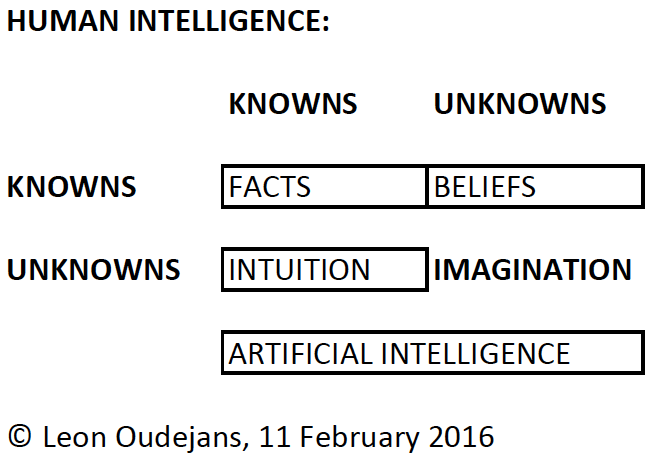 In my 12 March 2015 blog I introduced the terms (un)known (un)knowns which terms I borrowed from Nassim Nicholas Taleb‘s 2001 book ‘Fooled By Randomness‘ (PDF). I used these terms to explain the differences between human and artificial intelligence. See graphic below.

One could even argue that Isaac Asimov‘s Three Laws of Robotics (1942) already covered the area of ‘beliefs‘ – the belief that a human life is more important than a machine’s life.

The only remaining distinctive area for human intelligence is imagination (eg, dreams, fantasies).

I sincerely doubt that AI could ever cover this. My argument is that we still fail to understand our own imagination. “While many theories exist to explain why we dream, no one yet fully understands their purpose, let alone how to interpret the meaning of dreams. While research has not demonstrated a purpose for dreams, many experts believe that dreams do have meaning”. (Psychology)

Frankly, it’s hard for me to understand how something can have meaning without having purpose. This idea might just be a typical philosophical (if life has no purpose, can it have a meaning?) and scientific belief (eg, evolution and religion, universe and design).

In my view, the meaning of dreams should reveal their purpose. So let’s start with the types of dreams. Unfortunately these are not exhaustive: “Dreams can have varying natures, such as being frightening, exciting, magical, melancholic, adventurous, or sexual. [] Dreams can at times make a creative thought occur to the person or give a sense of inspiration.” (Wiki). The last sentence may suggest an implicit purpose.

[Verse 2]
Now here I go again, I see the crystal visions
I keep my visions to myself
It’s only me who wants to wrap around your dreams