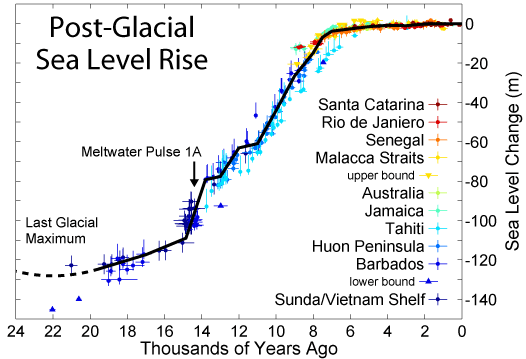 In many of these mysterious underwater objects there are 2 striking features: relatively low depth and a high ageing. Both support a Great Flood at around 18,000 years ago (16,000 BC) and which lasted for some 7,000 years (until 4,000 BC); see yesterday’s blog.

I just found a most intriguing graph. “This figure shows sea level rise since the end of the last glacial episode based on data from Fleming et al. 1998, Fleming 2000, & Milne et al. 2005″. (source)

The only “mysterious” element about these underwater objects is the fact that we know almost nothing about our oceans although 71% of Earth’s surface is covered with water (Wiki). Less than 0.05% of the ocean floor has been mapped to a level of detail useful for detecting items such as airplane wreckage or the spires of undersea volcanic vents (Scientific American). In fact, we know more about the moon and other planets than our oceans: Venus 98%, Mars 60% and our moon even 100% at a seven meter resolution (Scientific American).

NatGeo: “Ancient stories of massive floods pass from generation to generation and in many places in the world are integral to a people’s spoken history. The tales differ by locale, but commonly feature torrential rains or a hugely destructive wall of water bursting into a valley, destroying everything in its path. In many cases, the flooding is an act of retribution by displeased gods”.

NatGeo: “Many scholars argue that the real rising sea level slowly invaded the Stone Age hunting territories for thousands of years, and the stories compress this event into overnight floods, storms, and destruction.” Note: all bold and Italic markings are mine.

The very rapid sea level rise as of c18,000 years ago may indeed have wiped out some ancient highly advanced civilisations (eg, list of prehistoric mega-tsunamis in Wiki).