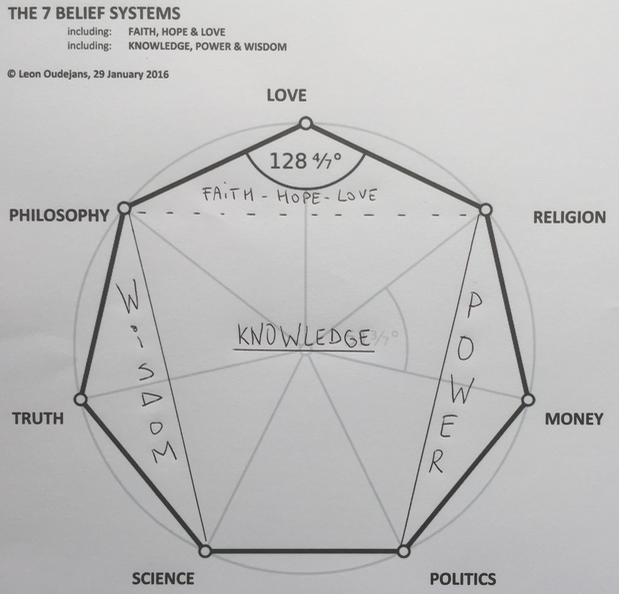 The 7 Belief systems – a revisit

During 2015, my concept of the 7 Belief systems slowly evolved. In my 14 March 2015 blog, I presented the initial 6 Belief systems: Money, Philosophy, Politics, Religion, Science, and the Truth. I concluded that “the essential element of any belief system is the willingness to die for your belief“. It took me 2-3 weeks to realise that Love is a separate 7th Belief system. History is full of people who were willing to die for believing in Love.

Still some things were nagging inside me. Most of all the concept of Power. In my 24 November 2015 blog I finally concluded that “the ultimate answer is that Power is worth killing for but not – and by definition – worth dying for. The ultimate goal of Power is to retain power.” In that same blog I assumed that Knowledge and Power are each other’s opposites. I was wrong.

In my 29 January 2016 blog, I concluded that “accumulating Knowledge can be used for gaining Power or Wisdom”. Despite the proverbial equation “Knowledge = Power”, actually Wisdom is the opposite of Power rather than Knowledge.

Hence, I decided that it’s high time to revisit my concept of the 7 Belief systems: Love, Money, Philosophy, Politics, Religion, Science and the Truth, and to include all new insight in 1 diagram.

In the accompanying diagram, I have reordered the labels of the heptagon in order to show where Wisdom and Power are primarily located.

Wisdom covers the labels Philosophy, Science and the Truth.

Power covers the labels Money, Politics and Religion. In authoritarian situations, Power will usually also absorb Philosophy, Science and the Truth and even try to absorb Love.

Love is the only label that is fully separate from Power and Wisdom – in normal situations. Perhaps because Love is the greatest of all.

The triangle Love, Philosophy and Religion may represent the triangle Faith, Hope & Love.

For the moment, this diagram constitutes my current thinking. To be continued.