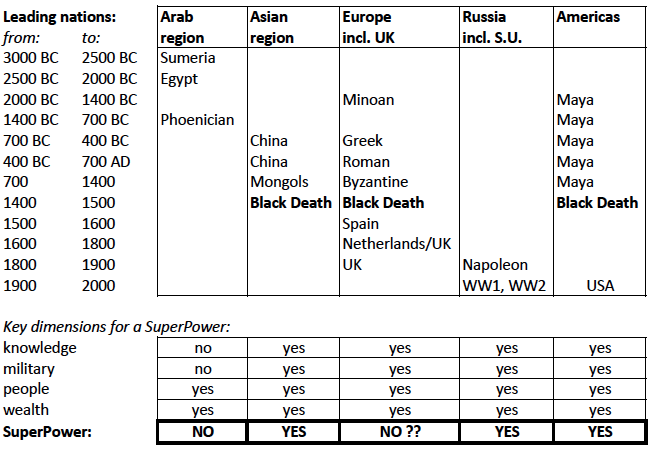 Chaos, Equilibrium, SuperPowers and the United States of Europe

The huge turmoil since the beginning of the 21st Century (e.g., TwinTowers, global financial crisis, ISIS/ISIL, Ukraine) feels like a pressure cooker which is either bursting in total chaos or is looking for a new equilibrium. Or both, as chaos is the required ingredient for arriving to a new equilibrium. A new equilibrium should be found amongst its key power dimensions, being: knowledge, military, population size and wealth (see my March 25 blog).

Below I have roughly outlined prior and present equilibriums for the past 5,000 years:

Yet, a united Europe – especially led by Germany – may well be Russia’s biggest fear given its own history (i.e., attack by Napoleon, WW1, attack by Hitler). Such fears would also explain all its ploys for dividing European ranks and for its attempts preventing further European consolidation (e.g., continued NATO expansion, Crimea, Ukraine).

For the majority of the past 5,000 years, Europe has been the leading region on Earth. Unlike religious differences (Arab region), political differences are easy to resolve. United we stand, divided we fall. (Source)